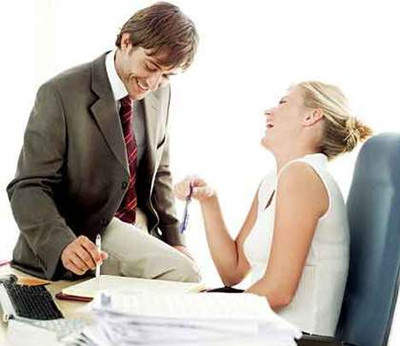 Being ogled by the office lothario probably makes most women feel uncomfortable.

Now, it seems, it might also affect their work performance.

A study has found women who were subjected to an "objectifying gaze" by men at work scored less well in maths tests than those who were not.

Men who were ogled by women, however, scored the same as those who were not.

The researchers say the findings may have implications for boosting the numbers of women in traditionally male-dominated fields such as science, technology and engineering.

They asked 150 men and women to take part in an interview exercise and told them it was to examine how people work in teams. Each participant was assigned an interviewer of the opposite sex.

When they entered the room, some of the volunteers, all undergraduate students, were looked up and down from head to waist and back again by the interviewer, who then proceeded to glance at their chest intermittently during the interview.

Afterwards they were given written feedback in which the "objectified" women were told they looked good, as well as an assessment of their abilities.

They then had 10 minutes to complete 12 maths problems.

Women who were leered at got an average of less than five questions right, compared with six if they were not given any unwarranted attention.

Both groups of men scored the same whether or not they were ogled.

Being stared at seemed to make the women more motivated to interact with their interviewer. But it is unclear whether this was down to being flattered by the attention or more keen to prove their intelligence.

Lead researcher Dr Sarah Gervais of the University of Nebraska said: "It creates this vicious cycle for women in which theyre under-performing in maths or at work, but theyre continuing to want to interact with the person whos making them under- perform in the first place."

The study is published in the journal Psychology of Women Quarterly.